• Arnott has launched a new aftermarket front strut for the 2016-2018 Tesla Model S
• The new strut is the first part for Tesla to be released by Arnott
• The product is engineered and assembled in the U.S. with an Eibach damper and a multi-ply ContiTech air sleeve

Arnott, the industry leader in aftermarket air suspension products, has introduced a new, premium air suspension strut for the front of the 2016-2018 Tesla Model S w/AWD. The new strut is the first part for a Tesla model to be released by Arnott. 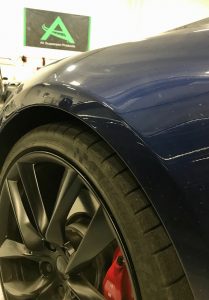 The Arnott-engineered AS-3380 features a premium Eibach® damper precisely tuned to ride like the OE. The Tesla strut is designed, tested and assembled in the U.S. with Tier 1 components including a multi-ply ContiTech air sleeve, long-lasting O-rings and bump stop, heavy-duty crimping rings and a CNC-machined top mount made from aircraft-quality aluminum.

The premium product maintains the auto-leveling functionality of the Tesla Model S, which includes lowering the vehicle using air suspension at higher speeds to be more aerodynamic. The universal strut, which fits both the left or right side of the vehicle, is backed by Arnott’s industry-leading warranty.